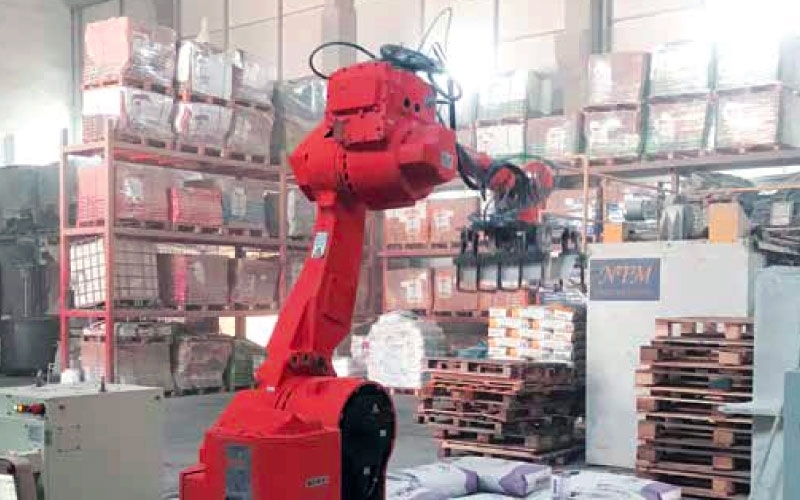 Myfix Construction Chemicals offer solutions for the construction sector, which is considered one of Turkeys leading field, robot investments made with increasing production speed. Myfix Construction Chemicals General Manager Uğur Yıldız says that, they have been using robots on the production line since 2011, “Palletizing with manpower was a threat to the health of the employee in terms of occupational health and did not give an orderly appearance. This investment was inevitable as the production speed increased. We are among the first ones to make this investment in the sector in its own scale”.

Myfix Construction Chemicals, which has been operating in the field of construction chemicals since 2011, continues to produce in its factory located in Gebze Dilovası.

Uğur Yıldız Who is General Manager of Myfix Construction Chemicals said that they made a robot investment, in order to protect the health and safety of workers. After the investment, they have achieved different outputs such as increasing production speed and providing a more orderly appearance.

Can you analyse the sector you serve?

In our country, one of the sectors called locomotives is construction. Construction chemicals which produce the right products for different applications in structures during the transition from traditionality to technology, are an integral part of the construction sector. There are many domestic and foreign capital producers in our country, approximately 50 percent of them are producing in Marmara Region.

As such, we compete with many small and large companies in a region where competition is most intense. Being a "reliable manufacturer" for our company, which makes production with 100% domestic capital investment, comes at the very beginning of our principles. We are working to provide our customers who prefer Myfix brand in the best way with confidence, quality and after-sales service.

We are increasing our sales network day by day with the increase in our domestic and foreign market share.

Could you tell us about the robot applications in your factory? In which line of production do you use a robot?

Robotic system is used for stacking of produced cement based plaster, adhesive and mortar sacks on pallets. Sacks placed in a specific order on the pallet are ready for shipment by covering their protective packaging.

When did you switch to robotic production?

Our company, which started production at the beginning of 2011, purchased the current production plant in Dilovası after 15 months. In the continuation of the automated production, the robotic power was put into the palletizing system by disabling the manpower in order to place the products on the pallet.

How did the need for robot investment arise?

In the past, pallets made with manpower did pose a threat to the health of the employee in terms of occupational health and safety and also did not give an orderly appearance. This was inevitable as the production speed increased. We can say that we are among the first ones to make this investment in the sector.

What were the production results and their advantages? What kind of contribution did your robot investments give to you?

It has helped us to increase our production and shipment speed, to use our workers more efficiently and to maintain their health.

The robotic system has also enabled us to prove our difference from the manufacturers that are called as unregistered or manufacturers producing in poor conditions by contributing to the brand image with the image it forms.

Has there been a decrease in labour costs? How was that process?

The cost of the robotic system is not much, except for the annual periodical maintenance. At the same time, the constant yield is obtained because of working in the same performance from the beginning to the end of the production. Labour costs per product also decrease in this sense.

In which areas do you plan to invest on robots in the future?

At the moment, one of our production line is made with robot palletizing, while our other line works with Elevator Palletizer system. In the following periods, we have the idea to put our second production line into the robotic system.

What kind of feasibility study did you get from your pre-investment integrator/robot company?

For us, speed is one of the parameters we care about. We have obtained feasibility studies that we can produce more products per unit time by increasing the efficiency of the sack filling machine of the robotic system, which provides low maintenance costs and ease of use, while at the same time we are able to standardise the duration of a total pallet.

What is the perspective of the Turkish manufacturer on human-machine collaborative robots? What do you observe as one of the production; do you think there is such a demand in the market?

Turkish manufacturers are not yet ready for such an investment, but if developing and changing technological conditions require these robots, they can take their place in production. Together with Industry 4.0, manufacturers go to modernization in their facilities.

Based on this, do you have any work in the field of “Lean Manufacturing”? Is such demands being asked of you? Do you think the producer is conscious about this?

In fact, we are paying extra costs for unnecessary attributes. It is our duty to ensure that it is used correctly in the application by producing suitable products. By making production simple, it is aimed to reduce costs by decreasing all kinds of wastes (errors, excessive production, inventories, waiting, unnecessary works, unnecessary movements, and unnecessary transports) in all product/service stages, to increase customer satisfaction, to gain flexibility to adapt to market conditions, to accelerate cash flow. Large or small companies have to serve in an environment where there are many competitors and increasingly conscious consumers.